Skip to content
HomeAltnabreac – from Highland Railway to LMS

The banking remittance slips shown here are a tiny but touching example of how the amalgamation, or Grouping, of railway companies, under The Railways Act of 1921, permeated to every outpost of the railway system of Great Britain at the turn of 1923.  Altnebreac Station is in remotest Caithness, a little south of Thurso, but almost as far north as it is possible to go on the railways of Scotland. Prior to “The Grouping” it was part of The Highland Railway. Altnebreac is reputedly Britain’s most isolated station.

On the left (below) the cash remittance slip (27) is for the weekend of 23’rd to 25’th December 1922 when the station was part of The Highland Railway. On the right the slip (28) is for the following weekend when it became part of the new London, Midland and Scottish Railway.  The London Midland and Scottish Railway inscription has been stamped over The Highland Railway heading signifying that the Highland Railway had ceased to exist at midnight on 31’st December. Even so the slip also carries a second stamp reading “Highland Railway 2’nd January 1923” which is technically incorrect. One wonders at the feelings of the employee Geo. Strachan who signed the slips. For him the old familiar local company is no more, swallowed up by some monster governed from Euston almost a thousand miles away by train. Note his mistake of writing “1’st January 1922” (instead of 1923). A common error even these days when writing cheques at the start of a new year. 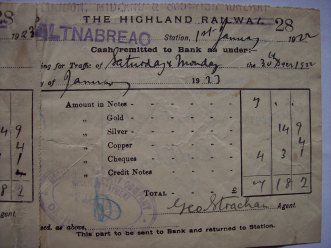 The Grouping of the Railways.

In Great Britain, during the nineteenth century, there was no central strategy for the building of railways. Instead market forces and vested interests dictated what schemes were put forward and which gained parliamentary approval. Initially this was promoted by an almost blind faith in financially backing any railway project; although that changed after the Overend and Gurney Bank collapse of 1866 – the last run on a British Bank until Northern Rock in 2007. In the 38 years from 1821, when the first act of the Stockton and Darlington line was passed, up to the end of 1858 no less than 1,686 special Railway Acts were passed (England & Wales 1,248, Scotland 279, Ireland 159)*. The result was a rather disorganized competing plethora of lines with duplication of routes and roles. Some of the smaller lines struggled commercially almost from the outset and had to be bailed out, supported by or taken over by the larger companies. In order to remedy this “mess” it was decided to impose a rationalization on railways. The legal powers to do so were contained in the Railway Act of 1921 and the process has come to be known as  “The Grouping of the Railway”

The opening text of the Act defined its purpose as: “With a view to the reorganisation and more efficient and economical working of the railway system of Great Britain railways shall be formed into groups in accordance with the provisions of this Act, and the principal railway companies in each group shall be amalgamated, and other companies absorbed in manner provided by this Act.”

“The constituent companies in any group may on or before the first day of January nineteen hundred and twenty three, submit to the Minister of Transport an amalgamation scheme framed in accordance with the provisions of this Act which has been agreed to by all those companies.”