This railway line, approximately four miles long, is situated in south Gloucestershire adjacent to the River Severn. It was opened by the Midland Railway in 1876 to connect the main line from Gloucester to Bristol with the docks at Sharpness.  Initially just a branch line it became a through route when the the Severn Railway Bridge opened in 1879; and remained so until the demise of that bridge it 1960. Passenger services were withdrawn in November 1964, but the line remained open for freight traffic most strategically for nuclear flask movements to and from Berkeley Nuclear Power Station. Now little used The Vale of Berkeley Railway have aspirations to take it on as a heritage line. 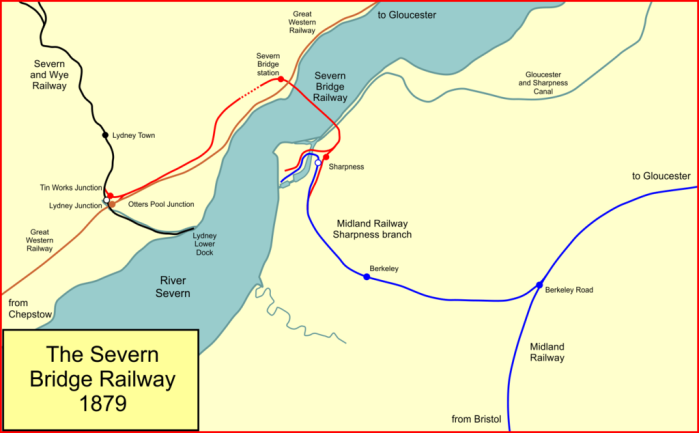 The staff who worked the line in 1891, during it’s heyday

Censuses from 100 and more years ago can be used to investigate past relatives and family trees. They can also be used to research former local communities more generally. The census returns for Gloucestershire for 1891 are available on CD. I have gone through those for the Berkeley and Sharpness area to identify the individuals who worked on the railway at that time.

This may not identify everyone as some might have been away from home on the night of the census, Sunday 5th April. It should though give some insight into the working of the line at a time before the motor car when most folk got about locally on foot. In this quite rural setting few would have lived far from their place of work. The pages of the census list households in a logical geographical manner. The sequence of properties mentioned can be followed on contemporary maps. I have used those made available on-line by The National Library of Scotland. The entry for each individual includes address, name, relationship to the head of the family, sex, marital status, age, occupation and place of birth.

In places the handwriting is difficult to decipher risking misinterpreted of some names. In the following text the individual’s age and birth place are in brackets unless otherwise explained. The children’s places of birth reveal the itinerant history of some families. The older and more senior railway employees tended to have moved around; possibly within the Midland Railway system as they gained promotions.

There were three stations on the line: Berkeley Road Station, where the railway branched off form the main Gloucester- Bristol line, Berkeley Station about mid way along the line, and Sharpness Station adjacent to the docks and the Gloucester and Sharpness Canal.

The census records 6 railway employees living in adjacent properties close to the station. James Ganter (41, West Dean) was the Station Master living on the job with his wife Fanny (45, Compton, Sussex). Their eldest, Henry Ganter, (15, Peterborough) was the booking clerk.  The 3 other children Edith (14, Wisbech), Gertrude (10, Kilnhurst, Yorkshire) and Frederick (7, Berkeley) were still at school. The fact that Frederick was born locally suggests that James had been employed here for at least 7 years.

In the cottage on one side of the Station Master’s House lived James Wager (35, Slimbridge,) a platelayer, and his wife Louisa (33, Ashton under Hill) with their boys David (11, Normanton) & Charles (9, Normanton) and daughter Ethel (7, Upton St Leonards). With them lodged Walter Orgaw (22, Cheltenham) the station porter.

In the two cottages on the other side of the Station Master’s House lived 2 signalmen. They were Daniel Morgan (37, Newcastle, Monmouth), with his wife Eliza (29, Apperknowle, Derbyshire), daughter Emily (14, Masborough) and sons Henry (12, Unstone, Derbyshire) and Frank (3, Apperknowle). Next door to them was John Bishop (57, Staverton), wife Emma (38), sons Alfred (17), William (15) and Frederick (13), all born at Cinderford, and sisters Minnie (13) and Gerty (9) both born at Woolesford, Yorkshire.

The situation here was a little different. Only the Station Master lived at the station; in a property referred to as “Ladymead”. He was Albert Bliss (49). Both he and his wife Eleanor (55) were from Northamptonshire, though their only child Arthur (14) had been born at Kirkthorpe, Wakefield. The rest of the staff lived a short distance away in the village itself.

The nearest was James Barry (37) a railway platelayer who with his wife Sophia (32) and their two young children Thomas (8) and Lucy Ann (3) lived on Maryleport Street (today’s Marybrook St); all longstanding local folk.  On the High Street Edward Lovelock (49) ran a Coffee Tavern and alongside  his wife, daughter and 2 grand-daughters had 5 unmarried male boarders 3 of whom were railway employees: George Archer (18, Lea Marsden, Warwickshire) a railway porter, Henry Haines (21, Cirencester) a railway porter and Frank Marchant (22, Nottingham) a signalman.

To the west of the village at “The Lynch” & “Oakhunger”, probably in the vicinity of today’s Lynch Rd and Oakhunger Lane, were 2 families with railway connections.

Charles Phillips (50, Standish) was head foreman platelayer, with his wife Anne (49, Slimbridge), and their four children Samuel (16) general labourer, Francis (15) grocer’s shop boy, Elizabeth (12) and Herbert (9). Two properties further on lived Albert Baker (31) head railway goods checker, his wife Susan (39), Annie (7), Rose (5) and Ellie (1); all born in Berkeley as were the Phillips children. Three doors down from them was Harry Phillips (25). He is described as a “steam engine driver” though this was probably not on the railways as the term locomotive driver would then more likely have been used.

The diverse range of occupations at Sharpness, listed in the census, reflects it maritime and yet rural location. In 1891 it seems to have been an economically active community.

Unsurprisingly there were more railway employees based here than elsewhere on the line. In the vicinity of Sharpness the census records 7 railway porters, 5 signalmen,  4 firemen, 3 clerks, 2 platelayers and the Station Master; the various types of railway worker tending to live under the same roof or in clusters.

Unlike at the Berkeley stations the Station Master, Leonard Kidd (34, Long Preston, Yorks), lived some way from the station residing in one of the properties just south of the Pier View Hotel in Newton on Oldminster Rd.

Clustered nearby within Newtown was James Tandy (18, Gloucester), a platelayer, living on New St with his parents, 2 siblings and 2 borders. In one of the Pier View Villa properties was James Corbett (38, Wootton), railway porter, with his wife Elizabeth (41, North Nibley). All of their 5 children aged 3-15 were born in Sharpness. On Moreton Terrace were brothers Leonard (20,) and Edwin (17) Weaver both railway porters. Although Leonard and their parents Mark (52) and Sarah (51) were all originally from Oxford, and Edwin from Almondsbury, the family had been in the locality for some years with younger siblings Gilfred (11) and William (9) both born in Berkeley. Two doors down was William Beard (26, Forest Green) also a porter and a lodger with the Sharp family.

The census records a hospital at Sharpness and marked on maps of the time is “Port Hospital (Infectious Diseases)” set a little back from the south side of the lock to the Tidal Basin and nestled between railway sidings.

The sequence of entries after the hospital is for Great Western Row which is probably today’s Great Western Road. This runs alongside of the Tidal Basin around to Severn Row, today’s Severn Rd, which being adjacent to the river is where the Coast Guard Station has been situated.

At 2 Great Western Row lived Herbert West (26, Bromsgrove) a railway clerk, with his wife Ellen (25, Gloucester), aided by a general domestic servant Ann Woodward (13, Berkeley), and their daughter Daisy (1, Berkeley) and Herbert (4 months, Berkeley). They had two lodgers, both also railway clerks, Ernest (20, Bitton) and George Cole (16, Dorset). Two doors down was Charles Cranmore (32, Wilton, Wilts) a steam engine fitter. At No.5 Severn Row lived Phillip (37, Radnage, Bucks) and in No.10 George Dunbabin (62, Moore, Cheshire), both described as engine divers; although these latter 3 men may not have worked for the railway. At a location described as “Cottage on Fields” and probably close to the Severn Row properties was the Phillips family of whom the eldest son Dan (16, Berkeley) was a Locomotive Fireman; perhaps a more aspiring occupation that that of his father Henry (51, Berkeley) who was a general dock labourer.

At Brookend, a short walk to the east of Sharpness. . .

There are some with railway occupations living to the south of the Berkeley-Sharpness line who may have worked on that line or the main Gloucester-Bristol route. At Berkeley Heath . . .

. . . was Daniel Turnbull (32, Berkeley) platelayer and Elias Fowler (40, Berkeley) described as “head ganger on railway”. At Heathfield (which is adjacent to the A38 – towards the village of Newport) was a cluster of railwaymen: Walter Barton (39, Falfield) platelayer, William Whittaker (52, North Nibley) platelayer, John Cole (31, Berkeley Heath) railway labourer (?platelater) and Alan Cook  (27, Cheltenham) railway porter.

It would have been fascinating to have seen the railway back then. I am sure those who worked the line would be astonished at what has happened to it since; with a new future in store for it perhaps. Let’s hope so.