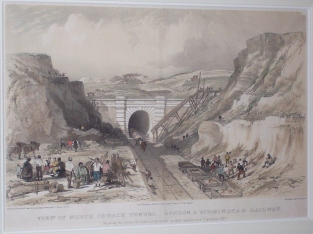 The London and Birmingham Railway

Northchurch Tunnel is located at the western edge of Berkhamsted in Hertfordshire. Today the “West Coast Main Line” passes through it with trains running to and from Euston and the north west. It was originally constructed for the London and Birmingham Railway between 1836-7. This work was awarded to W&L Cubitt as part of contract 5B (Berkhamsted). The same company also won contracts 4B and 6B  (Kings Langley and Aldbury) and were thus responsible for building a consecutive total length of 9 ¼ miles of railway. They also constructed the 1 mile Euston extension at the southern end of the line.

The record of the tunnel’s construction consists of two pages from an original ledger in my possession. These pages show that the tunnel was constructed utilizing two shafts. 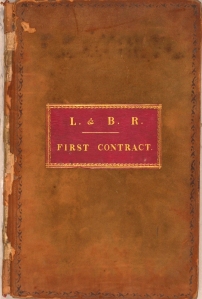 The main works took place during 1836 with attention to the portals in the first half of 1837. The yardage of tunnel created and the types and quantities of materials are documented at approximately monthly intervals; a slow process.

The rest of the ledger contains the civil engineering details for the building of that part of the London and Birmingham Railway in 1836/7 from Kings Langley (just north of Watford tunnel) to Tring Station. This is the section for contracts 4B, 5B & 6B and it is likely that the records are bound together because they were executed by the same contractor; W&L Cubitt.

This tunnel was part of contract 5B which was published as a sample contract by S. C Brees in the 1840’s in his first series on “Railway Practice” (see page 26 this link). A lithograph of the tunnel under construction was produced at the time. For Northchurch Tunnel we therefore have the written contract, the record of works and a contemporary image. Charles Dickens even wrote a piece about the life of the navvie working on this tunnel. 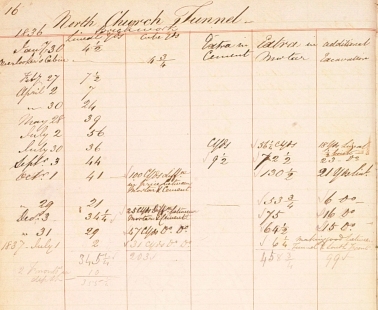 The Building of Northchurch Tunnel

The tunnel was to consist of a brick arch standing upon stone skew backs. These were embedded at the outer points of a counter or Inverted Arch  forming the base of the tunnel which was ultimately hidden beneath the level floor. Thus a visible arch held up the wall and roof and a shallower inverted arch stabilized the ground beneath. The longitudinal bricks were to be parallel with the rails and perfectly straight in the direction of the tunnel. The tunnel was to be large enough to convey two railway running tracks.

The construction of the tunnel proper, i.e. the excavation of the full bore with its brick lining, took place during 1836. However prior to this the contract required the digging of an initial “Heading” 4 feet wide and 5 feet high along the whole length of the planned tunnel. This was supported with timbering rather like a mine and served as a template from which to develop the tunnel. This had to be completed before work began on the main tunnel. This preliminary work was presumably undertaken in 1835.

Two vertical shafts, perfectly cylindrical in form, were then sunk for the main tunnel construction. These were 9 feet in diameter inside the brickwork which extended 10 feet above the surface of the ground as a circular protective wall. These shafts then provided four working faces for the excavation of the tunnel. Shaft 1 to the south, and shaft 2 to the north each having tunnel dug out in a London and Birmingham direction. It seems that most of the construction was done from these underground faces, rather than from the two external ends of the tunnel. The contractor was strictly required not to excavate more than 6 feet in advance of the completed brickwork and to support un-bricked excavation with timber. The excavation was to be as nearly as possible to the same dimensions as the brickwork and the gap between the outer rock wall and the bricks was to be firmly filled and packed. To ensure than this was done one labourer was to be specifically dedicated to this task and if the contractor failed to provide such a person then the engineer could allocate someone to the job at the contractor’s expense. Marks or signals were given to the contractor by the railway company’s engineers to regulate the direction and level of the tunnel.

The junction of the vertical shafts with the horizontal tunnel was considered a hazardous weak area. To deal with this the tunnel arch was to be 3 bricks thick, set in roman cement, for 12 feet either side of the shafts. For the rest of the tunnel, except the 7 feet 3 inches adjacent to the front portals, it was only 2 bricks thick using standard mortar. [The invert arch was 1 ½ bricks thick.] Also a cast iron ring curb was placed at the bottom of each shaft, where it met the tunnel, to buttress the junction.

The contract required that 150 yards of tunnel should be complete by the 1’st of August 1836. Work on the tunnel proper began in the January and progress was initially quite slow. By the end of April only 43 yards were brick lined. Things then accelerated and in June alone 56 yards were added. A total of 175 yards was achieved by August. On average between May and the end of December 1836 an average of 8.5 yards of lined tunnel was built each week. Towards the end of the year the navvies may have appreciated being underground as this was the worst winter for some centuries.

The tunnel was virtually complete just as 1836 ended. Just 2 yards of brickwork were added in July 1837 to make good the inter facing of the brick lined arch with the tunnel frontals. The ethos of the times was for tunnel frontals to make a grand statement about the railway company. The frontals of Northchurch tunnel are not the same but both contain over 5200 cubic feet of cut and faced stonework. Even the brickwork had to be finished off and faced with aesthetic white Cowley bricks. The North Frontal was constructed first between February and April 1837, with the South Frontal following during the June and July.

As measured by the brick lining Northchurch tunnel is 345 1/4 yards long but the two front portals have a depth of 10 yards giving a total overall length of 355 1/4 yards.