The information layout out here is taken from a grubby little Guard’s Report Book. It records the shuttle service on the Thornton to Methil line along the Fife coast on the northern shores of the  Firth of Forth  in 1889. Measuring 21 x 13 cms it would have been slipped in and out of the guard’s pocket innumerable times. At first glance what it records appears utterly mundane and repetitive. A four times daily return trip (5 on Saturdays, but no Sunday service) with a journey time of only 18 minutes. However on closer examination and with a little historical cross referencing it actually reveals some fascinating social details and railway politics.

The line was constructed principally for coal traffic but this documents the passenger service.

The line was built by  Randolph Gordon Erskine Wemyss,  the Laird of the local  Wemyss Castle  [not to be confused with Wymess Bay on the west coast Firth of Clyde] and clan chief. There were rich coal deposits under his lands in the immediate area and several collieries. He wanted the means to get this coal to market and thus needed a railway and docks.

Construction started on the  Thornton  to  Buckhaven  section in 1879 and opened 2 years later. The Buckhaven to Methil extension opened on 5/5/1887.

This short independant line was surrounded by  North British Railway  (NBR) lines resulting in some rivalries and the NBR purchased the line on 11/1/1889, with the Laird having a seat on the NBR board. Thereafter the Laird was not happy with the service the NBR provided for the shipment of his coal, with the grievance that they favoured other producers; particulary regarding access to the  Methil docks.  Around 1900 he therefore built another line of his own  which has become know as  The Private Wemyss Railway.

This Guard’s Record is thus from just 3 months after the NBR had taken over “his” original line. Laird Wemyss’ recent involvement with the NBR as a board member is hinted at by the entry for 13/4/1889, a Saturday: “Special to Thornton Junction with General Manager”. This left Methil at 1603, stopped at Wemyss Castle at 1609, presumably to pick up the GM as this was the only stop en route to Thornton (where he presumably boarded a main line train).  The train then ran straight back to Methil ready to work the 1659 scheduled train. At this time the GM was John Walker who held this office 1874-1891; when he died in post. He would have had good reason to visit to the Laird as a (possibly disgruntled) NBR Board member.

The guard throughout is Robert Leith. On most occasions the driver is John Pattison, but sometimes John Scott or John Anderson take a turn. Whatever the train team of the day they worked the full day’s timetable which on a Saturday is a long day – over 15 hours plus booking on and off time. [The Scottish National Archive  hold the NBR staff records and it may be possible to find out more about these men]

This is recorded in the book as: C x 1, T x 3, Gvan x 1.  My guess is that this indicates one  Composite (first & third),  3 Third class carriages and a goods/guards van, shuttling back and forth.

The social and economic prominence of the Laird is demonstrated by the comings and goings to Wemyss Castle. Listed above are the movement of horse boxes, corpse and luggage vans, and the visit of the General Manger of the North British Railway. Two other events are of note. On 6/4/1889, a Saturday, departing Methil at 1000 and stopping at Buckhaven is a “Special to Wemyss Castle with concert party”. The empty carriages then ran back non stop to Methil. Then on Saturday 27/4/1889 there is an extra train with the comment “Special to Thornton with through carriage with Mr Wemyss family – for  Kings Cross , London.” [see upper right two images of this page]

Many of the railway lines in this area have long since closed.  The Kingdom of Fife Railway Preservation Society  is though creating a heritage railway base near the site of the former Thornton to Methil line. 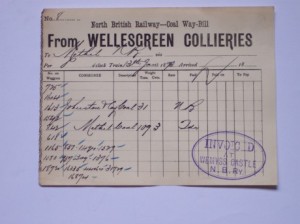