This page should be viewed in conjunction with a collection of correspondence that provides historical details of the efforts involved in seeking support and approval for The Oswestry and Llangynog Railway during the 1860-1880’s. To view the transcribed correspondence click go to. This was to have been a branch line along the Tanat Valley on the English:Welsh border.

The 3 Oswestry and Llangynog Railway Acts were:

These Acts are held in the Parliamentary Archives and copies may be purchased from them: see www.parliament.uk

The railway is described in three parts and this has mainly to do with how it was to connect up with existing lines at its eastern end:

Railway Number 1: To provide a connection with the Porth-y-Waen branch of the Cambrian Railway. This would give access to Oswestry. This section was to be one mile, one furlong, 5 chains and 10 links long.

Railway Number 2: This was the main part of the line up the Tanat Valley 13 miles and 2 furlongs in length.

Railway Number 3: This was a short fork (3 furlongs and 8 chains) at the eastern end of Railway number 2 that linked the latter with the Potteries Shrewsbury and North Wales Railway branch that ran up to Nantmawr.

Railway Number 2 could only connect with Railway Number 1 via a short section of the Nantmawr branch of the Potteries line (see diagram below; only relevant lines shown).

The sequence of opening had to be number 1, then number 2, then number 3. This would mean that the railway would be open for traffic to Oswestry over Cambrian Railway lines before the route east to Shrewsbury over the Potteries line. However the latter would have been academic because the Potteries Shrewsbury and North Wales Railway was bankrupt and defunct even by the time of the passing of the 1882 Act. 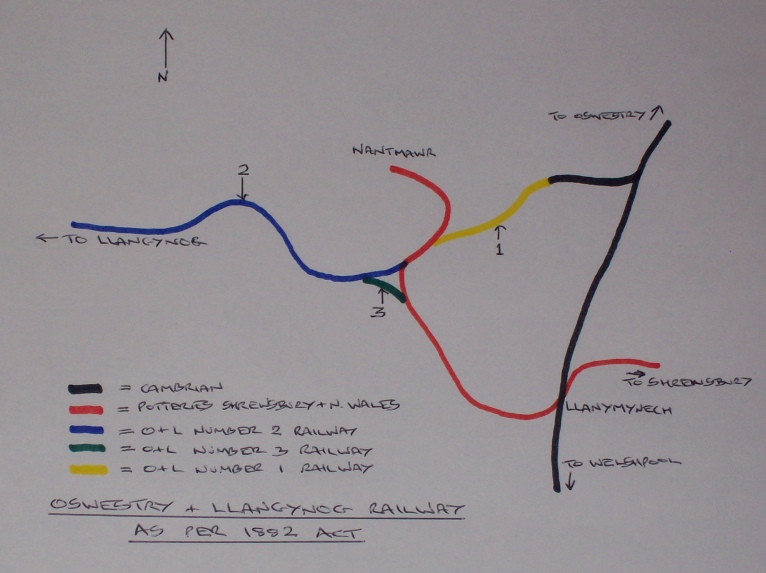 Thomas Dyne Steel had replaced William Henry Gascoigne Weaver during the passage of the Bill. The latter was mayor of Oswestry 1881-3.

Sir Watkin Williams Wynn was the local Baronet and Member of Parliament (MP) for Denbighshire from 1841 until his death in 1885. He was given special mention and privileges in the Act:

–  To nominate his own Director to the Company, and replace that person at will. This Director was separate from those nominated by the general shareholders of the Company.

–  To have his own ornate station built to serve his residence at Llangedwyn Hall, and that this should be completed before the line opened to general passenger traffic. Trains were to stop at this station at his request.

–  That no part of the railway should be open to the public until that part which served Llangedwyn Hall had been completed and opened first.

–  To retain full rights over any of his land used to construct the railway.

[This had been raised from £135,000 during the passage of the Bill through Parliament, and compares to the £60,000 suggested capital for the 1870 proposals]

The “deposit fund” was to be £6238-12-0. This was a bond for compensation of injured landowners etc should the railway not be built.

Construction timing: The railway should be built and open to the public within 4 years of receiving Royal Assent. The latter was granted on 10/8/1882.

Compulsory purchase of lands should be done within 2 years.

Running Rights: The railway was to have running rights over the Cambrian Railway from where the O&L line met the Cambrian Railway into the latter’s station at Oswestry. The Cambrian had running rights over the whole of the O&L. Both the O&L and the Cambrian could run over the short section of the Potteries, Shrewsbury and North Wales Railway that link the two of them. This was an obvious practical necessity to give continuity to the route. The Act gave the O&L powers to maintain this short section of the Potteries line.